What would we do without the Banana?  A perfect snack food, on the go.  With it’s protective outer skin, keeping the inner soft fruit, fresh and moist, natures work at it’s best. A substantial energy boost, when the tummy rumbles, or, for me, a great natural sweetener in my morning porridge. During a busy recording session at the studio a few years back, the good vibrations were in the room, the inspiration flowing. Not a good time to break for a proper meal. To keep the energy levels up, I reached three times to the bunch of bananas on top of the piano….not recommended…I have never eaten more than one per day since.

This morning I notice a bunch of the fruit, starting to adopt dark speckles, indicating they are on their way to the other side. At this point, I would normally remove the skin, chop them up and freeze in a plastic container, awaiting a quick five minute ice cream treat, as previously detailed in this blog. It being Saturday, I have a little more time on my hands, Banana bread muffins it it. What is missing from the photo above, is the fact that inside each of these muffins, a half inch sized piece of banana awaits. Served along with the quick homemade raspberry jam and banana cream cheese frosting, a great weekend treat with a cup of coffee. 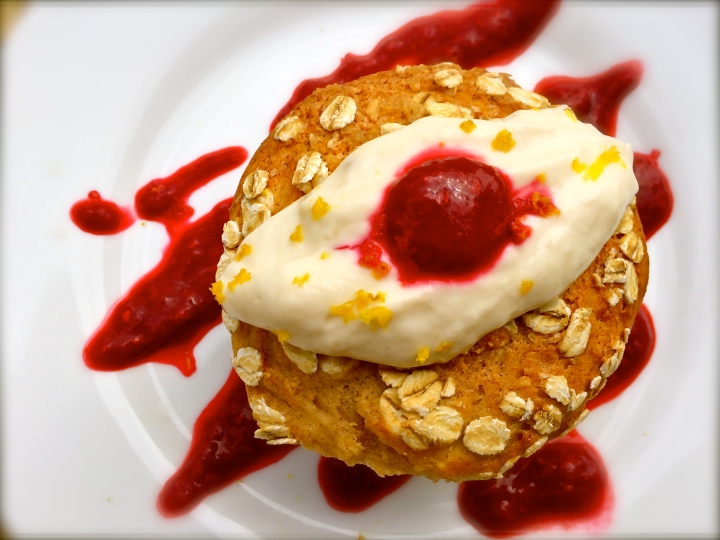 With so much banana going on here, feeling slightly Bananarama. Not a big fan of this band myself, some research led me to this memorable hit ” Venus”. 80’s…interesting!

Mix the flour, brown sugar and cinnamon in a bowl. When the melted butter has cooled, add to a separate bowl containing the beaten egg, milk, two mashed up bananas, and mix well to combine. Slowly transfer the wet ingredients into the dry ingredients and mix until combined. Using either muffin cases or plastic moulds, I prefer the latter, transfer a spoon of the final cake mixture into the bottom of each. Add a piece of banana into the middle, adding another spoon or two of the mixture to cover. Sprinkle some oat flakes over the top. Bake in the oven for about 20 minutes at 18o degrees. Once they start to brown slightly and well risen, you can be confident they are fully cooked. Allow to cool.